In 1989, in partnership with Les Filles de la Sagesse, a Catholic order of Sisters, the Catholic Centre for Immigrants (CCI Ottawa) opened a 96-bed reception facility Maison Thérèse Dallaire, at 204 Boteler Street in downtown Ottawa. Reception House, as it became known, provides temporary housing, orientation and initial settlement services, to incoming government sponsored refugees during their first month in Ottawa. Over the years this has been the first home in Canada for thousands of refugees.

ln 1991 the Catholic Centre for Immigrants (CCI Ottawa), with assistance from Les Soeurs de la charité d’Ottawa, bought, renovated and opened the Newcomer Centre at 219 Argyle Avenue, a five-storey office building. The idea was to offer a range of services in one building to recently arrived immigrants and refugees.

In 2001, through the generosity of Les Soeurs de la charité d’Ottawa, CCI Ottawa was able to pay off all existing mortgages and debts. In honour of their contribution, The Newcomer Centre was renamed The Bruyère Centre for Immigrants.

On November 23, 2011, Les Filles de la Sagesse donated the building to the Catholic Centre for Immigrants. To honour and mark the generosity of the Sisters, the building was renamed Maison Sophia Reception House.

CCI subsequently sold The Bruyère Centre for Immigrants to CC8 in 2012.

In 2018, with the generous support of the Ottawa Portuguese Community, CCI opened Welcome House, a transitional home for homeless immigrants who are in need of a temporary and welcoming home. It is staffed 24 hours a day, seven days a week. 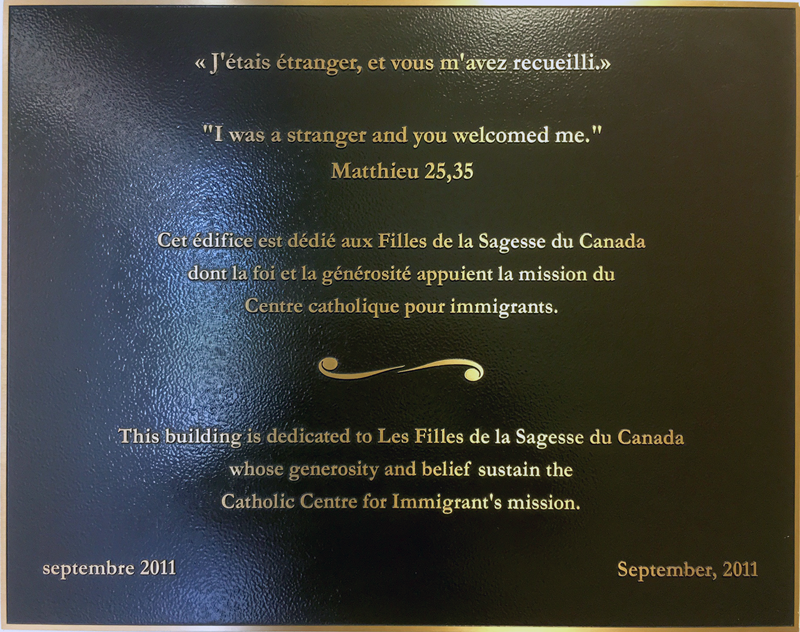 “I was a stranger and you welcomed me.” – Matthieu 25,35
This building is dedicated to Les Filles de la Sagesse du Canada whose generosity and belief sustain the Catholic Centre for Immigrant’s mission.  – September, 2011

This building is dedicated to the Sisters of Charity of Ottawa whose generosity and belief sustain the Catholic Immigration Centre’s mission.   – January 1, 2001